Zero In 7: Keeping the Faith: Acts of Mediation

The museum explores the idea of access from a range of places and period. The Keeping the Faith Acts of Mediation implies 1) positions of the parties involved, one on opposite sides of each other and another in the middle. 2) a certain attitude -- postitive or negative, hopeful or cynical, etc. 3) process negotiations, mediations, etc. and 4) the results/consequences of the coming together of the first two.

Jose Tence Ruiz' Topeless Victoria. Victoria refers to Queen Victoria of England after whom the Victorian period was named. The period is usually associated with prudishness and repression. There is therefore a contradiction in that the female figured is naked, except for the skirt. The skirt is a a Victorian skirt -- the bustle (frame used to support the drapery of the back of a woman's dress), crinolines (stiff fabric) and S Bends corsets (also knwon as health corest) were some of the means by which women of that period wore their skirt. This despite the thin body of the woman, the skirt does not fall off. Noe the femail figure's striving for balance as she stands amidst the boots and holds on top of her head the remains of an SUV that exploded as a car. The arits describes the female figure as an urban-poor Filipina and she represents people who are "often unwillingly, subject to powers beyond their control." One can perhaps say that there may be someone out side the frame who has put her in that difficult position or pose.

Kiri Dalenas installation focuses on the difficulty or impossibility of bridges, because of obstruction, deterioration and confinement. The images of pre-martial law and martial law eras you see projected here as well as in the other parts of the installation were taken from the archives of the Lopez Library.

We see the obstruction in the barricade. This barricade is a re-creation of the barricade set up by the students, teachers and personnel of UP Diliman during the First Quarter Storm. The First Quarter Sorm refers to the events during the first three month of 1970 when thousands of youth and students stormed the streets of Manila to protest rising tuition fees, no employment oppurtunities, low wages and other social problems in the Philippines under the U.S. puppet regime of then President Ferdinand Marcos. Starting in January 1970, the student-led demonstrations grew from 50,000 to 100,000 and continued relentlessly every week until March 1970. Marcos declared Martial Law two years after FQS in 1972. The FQS also crystallized the historic role and commitment that Filipino youth and students have contributed to the realization of the Philippines as a sovereign country and the political standard and legacy in which Filipino youth proudly honour and continue in the Philippines and around the world. Youth and students also stood in solidarity with Filipino workers, peasants, women and other sectors of Philippine society to criticize the Marcos administration, lambast US foreign policy and to vindicate the Philippines as a country for the Filipino people.

There are also unfired clay female figures that you see in this installation. These figures are also based on the photos from the archives of the Lopez Museum. "Unfired clay from earth can be dampened with water. It is easy to manipulate and holds together as you shape it into an object. When subjected to the heat of a kiln, the clay piece becomes hard and permanent, and is capable of maintaining its form interminably. As the figures are unfired there is a likelihood of deterioration.

There is also another female figure in clay which has been fired. One can view her through a peeping hold which is similar to what is found in doors of maximum security wards in detention facilities. The figures represent oridinary people. In the same way, Benedicto Cabrera depicted ordinary people in Soldiers (Heroes of the Past IV). But in contrast to Kiri's figures, Bencab's are mostly male. How many figures do you see? These figures are looking to something or someone outside of the frame.

In J Elizalde Navarro's Flying Machine for Icarus he refers to the Greek stor of Icarus, son of Greek Inventor of the labyrinth whiere the Minotaur is kept, who wore wings of wax but go too close to the sun. The wings melted and he fell into the sea and died.

Art critic Alice Guillermo writes that "the half body is surrounded at the waist by a circlular fairy ring of omphali (or the scar where the umbilical cord is attached) and various creatures while the filed around sprouts mushroom" Mushrooms usually create an arc or a circle known as fairy rings so one sees here the coming together of the two images. Mushrooms may also refer to the mushroom cloud of the atomic bomb (destruction) as well as certain hallucinogenic or mind-altering effects. In terms of mind-altering effects, one can use what is known as entheogen. "An entheogen in the strictest sense, is a psychoactive substance used in a religious or shamanic (or entheogenic) context. Entheogens generally come from the plant sources which contain molecules closely related to endogenous neurochemicals. The word "entheogen" is a neologism derived from two words of ancient Greek. The adjective etheos translates to Enlish as full of the god, inspired, possessed," and is the root of the English word, "enthusiasm." The Greeks used it as a term of praise for poets and other artists. Genesthai mean to come into being.Thus an entheogen is a substance that causes one to become inspired or to experience feelings of inspiration, often in a religious or spiritual manner.

Guillermo likens the stone panel to gunungan. The gunungan or kayon is a representation of the ancient Tree motif originating from India. This consists of two parts: a mountain and a tree. The Tree Motif is rendered as a combination of two different trees. the fig tree rooted in heaven and the earthbound lotus tree rising from the waters. The former, placed above, has implanted its root in the top of the stem of the tree shaped lotus. The lotus is the very symbol of life springing from the water. The celestial fig tree represents "creative breath" or fire, which is as essential in creating life as the water's essence

Destruction may be what the eruption of Mount Pinatubo wrought to the residents, but through the performance of Robert Villanueva, a certain healing is achieved. Edgardo Navarro and Rica Concepcion made a video documentary on the works of Villanueva. As a performance artist, Villanueva was a showman, but at the heart of his performance is his desire to heal. Note how Villanueva negotiates with the elder of the Aeta tribe, and how he himself, recognizing a fellow shaman, asks for healing himself.

Into seminal documents conscripted in the long-term project of enabling Filipinos to emerge from the black-hole of colonial misinterpretation, thus making that which was invisible ultimately present and concrete. Part of the exhibition are prints which show how foreign visitors see the Philippines. One visitor, Elizabeth Klein who was in Bagui and in Mindannao wrote, "It is easy to distinguish some of the tribes. The Ifugao is tall with bobbed head, brass bracelets at the knee and hge armlest of brass twisted round and round," and "the Moro men are handsome in spite of betel-stained mouths. The women are slender small and graceful, and the and their dark-eyed babies make me think of Turks." Klein's watercolors were made into colored woodcut prints by Watanabe Shozaburo. There is also a European look and feel to the other prints. As for the books, there is a focus on the Philippine revolution as this was the period when the Philippine nation was emerging. This nation was created not only by the actions of people, but also through the cracks in the parchment, the voices of the people seemingly effaced are heard. The revolution was not only limit to the revolution of 1898, but continues in the revolution waged by the CCP and the NPA.

Works of representations implying transgressions of social constraints and other things, and passing the border between the known world and the unknown world. Death is unknown and it is perhaps this fear of unknown which causes the souls to attempt to get out of the boat despite the rough seas in La Barca de Aqueronte. Charin is the ferryman of Hades who carried souls of the newly deceased across the river that divided the world of the living from the world of the dead. We see someone dead in Ofelia, representing a character in William Shakspeare's Hamlet. She goes mad and drowns. Is it believed that she committed suicide, a taboo. Ancient Filipinos also have representations of souls being ferried across waters in objects such as the Manunggul Jar. Christians now have rituals to bade the departed farewell, although many say that the ceremony is more for the living than for the dead.

Transgressions are shocking and may be violent. We see that in the El Asesinato del Gobernador Heneral Bustamente y Su Hijo as well as a Derota de Limahong. In the El Asesinato, the power struggle between the Church and the State is implied. Note the diagonal lines in the Asesinato which imply movement as well as create an certain sharpness in the work. In Espana y Filipinas as well as Per Pacem et Libertatem we see the postion assumed by Spain and the United Staes vis-a-vis the Philippines. In Philippine history, the relation between the Spain and the Philippines as well as that of the US and the Philippines has not always been smooth. Perhaps these images have been used to smoothen the relations between these nations. Or perhaps these represent wished for scenarios that was supposed to come out of negotiations, mediations.

Keeping the Faith: Acts of Mediation explores the notion of access across the registers of time and place. We find exhibitions pieces from the Lopez Museum collection indicative of junctures of tummult, transition, and stress. The hint at the tenacity and aptitude required to proceed from these volatile planes. Referencing this instability persuades us to look at the negotiations which occur and become manifest in gestures of propitiation, definance, inveigling, carousing, and so on. The exhibition also allows us to peer into seminal documents conscripted in the long term project of enabling Filipinos to emerge from the black hole of colonial mis-interpretation, thus making that which was invisible ultimately present and concrete.

Keeping the Faith further occasions the juxtaposing of its trove alongside the work of two contemporary sculptures Agnes Arellano and Kiri Dalena, and the documentary film makers Egay Navarro, and Roca Concepcion. Taken together, the assembly of objects and time-based works attempt to evoke both memory and aspiration for a kinder and possibly more human experience. 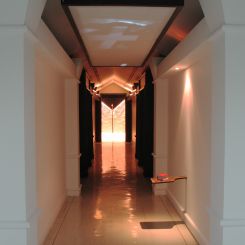 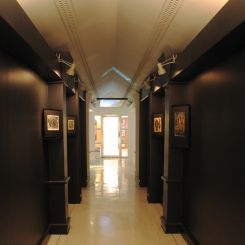 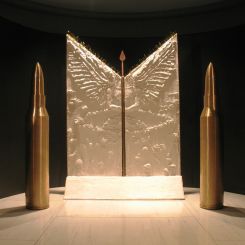 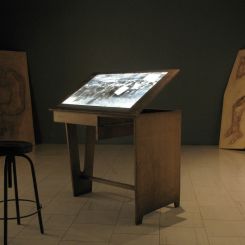 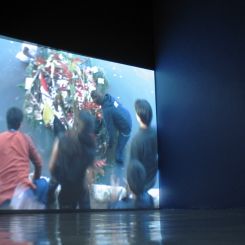 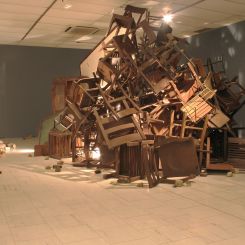