Blur explored the fissures at which supposed polar opposites converge and where assumed dualities collapse. Taking off from the notion of hybridity as used in the field of genetics, Blur demonstrated how artists took it upon themselves to work outside the categories constructed by art history, criticism, art education, and in other ways that the art world attempted to make sense of their work. Going beyond the idea of fusing the arbitrary, hybridization here took into account notions such as deliberation, power, and positionality.

Blur was created as part of Zero In 6: Hybridity. An annual consortium among the Ateneo Art Gallery Ayala Museum, Bahay Tsinoy, Museo Pambata and the Lopez Museum and Library. Hybridity refers to mixture Mixture implies that there is no chemical reaction or change, and the elements in the mixture can separated back into its original components. Change as implied by movement, and the division or classification indicated by the separation are some of the issues related to hybrid which the Lopez Museum and Library explores in exhibtion Blur. Blur refers to an unprocessed image. Although the term is closely associated with photography and graphic arts, it is used by LML to explore the Philippine art, in particular the art practices of artists, have been seen.

Featured in the exhibition are works by National Artists Cesar Legaspi, J Elizalde Navarro and Ang Kuikok, and works by Onib Olmedo and Sati Bose. Alongside these works can be seen Jose Tence Ruiz's CSI (Chimoy si Imbisibol) and Lyra Abueg Garcellano's Where the Road to Hell is Paved with Good Intentions.

J Elizalde Navarro (1924-2004) has worked in a variety of styles. A painter and a sculptor who did story and commercial illustrations. Navarro has done abstract and figurative works in oils and watercolor, assemblages. In his Centennial Flag, Navarro uses a variety of techiniques. Onib Olmedo is best known for portraits but has also done landscapes. Noticeable in his works is his use of distortion, "including discrepancies of scale (Alice Guillermo, Onib Olmedo: Dimensions of Depth). Note that Olmedo's work the subject does not look at the viewer. He is not "primarily concerned with the plane of external appearance" but rather composes his figures not only on the surface laterally, but also in depth." What effect does this have on the work? In his space, there is continuous shifting of lines and forms.

The title of Lyra Garcellano's (b. 1972) works refers to an idiomatic expression which means 'merely intending to good without actually doing it is of no value.' The proverb is attributed to English writer Samuel Johnson (1709-1784; Dictionary of the English Language) as well as St. Bernard of Clairvaux (1091-1153; French abbot and the primary builder of the Cistercian monastic order. The most influential advocate of the Second Crusade). According to the artist, it is the first time she has done a work and putting the title afterward. In the work, the guns are symbols of propulsion (movement), violence as well as an instrument to stop violence. Is there any association you make with the gun? The swing also symbolizes propulsion but because of the delicate material (glass), "the viewer is alwaus confronted with the idea that the sings may fall and break." The work would like to communicate to the viewer that "life is a series of push and pull and that no matter what you do in the so-called name of good, there's always something wrong likely to happen."

Jose Tence Ruiz revives his Invisible Man persona, this time with the persona wearing pambahay clothes as he is doing house chores. The work attempts to many things. One, it aims to evoke the performance of the household chores-- we do not see the actual performance of these chores, but the print is used as a means to access the viewers' imagination to help them re-create the said event. The act of 'freesing' the performance through the print is also similar to most everone's response of focusing on certain elements of a performance of impatience, visual overload, etc. Two, the work also refer to the domestics who are invisble in the sense that their presence in a Filipino household is taken as matter of fact or natural, despite the fact that is is not so. Three, the work is a mediation on the wayy he relates to ousehold chores as well as the idea of personal/private becoming public through the performance/still of the performances. In the words of the artist, "art blurring domestic lines."

Ang Kuikok's Seated Figure has similarties with the figures in CSI in that they are seemingly bald. Using a style similar to Western Cubism, Ang Kuikok synthesizes "what has been broken down into a unified interpretation of human agony." Note the handwriting which appears in Cesar Legaspo The Idol which is similar to the lettering in the text in Tence Ruiz' work.

Santi Bose Circo Simpao is an example of the artist's photo-image-turned-painting, as art advocate John Silva puts it. Bose did photography, editorial design, advertising and had interest in indigenous art marketing. Experimenting with different media, Bose pioneered in the use of indegenous materials and he "used pre-colonial symbols at ironically juxtaposed with Western symbols" According to Silva, he has given Bose a 1937 photo of restaurants diners watching a girl balancing on a tightrope which the artist transformed into Circo Simpao (in reference to the circus that went to Baguio every summer when they were young).

Severino "Nonoy" Santos Marcelo Tisoy appreared in Manila Times in 1963. This was made into a sitcom in 1968 with Jimmy Morato as Tisoy, Pilar Pilapik as Maibubut, Bert Marcela as Tikyo and Moody Diaz as Aling Otik. The latter two reprise their roles in the directed by Ishmael Bernal. According to the late artist, he based his character Tisoy on Anding Roces whom he knew in FEU as well in the Manila Times. He also saw his characters as extensions of the types created by Jose Rizal -- TIsoy is Pelaez, Tikoy is Placido Penitente, Maribubut is Maria Clara. Colonial mentality was what the artist tried to poke fun of in his work.

Romulo Olazo's work is part of his Diaphanous series based on an original collograph a print resulting from collogrpahy printmaking process in which materials are applied to a rigid substance (such as cardboard or wood), ink is applied to the resulting collage, and the board is printed onto paper or another material). The work's focus on the layering process has encouraged the artist to modify the "basic layering process by crumpling and folding the fine diaphanous tissues, by heightening the tonal play in thin sharp facets, and by superimposing quick gestural strokes to stimulate the surface." 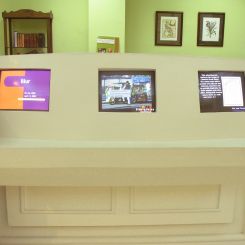 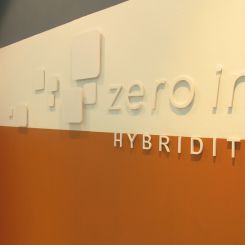 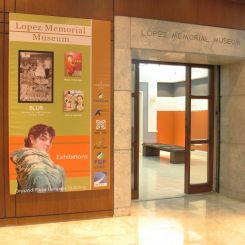 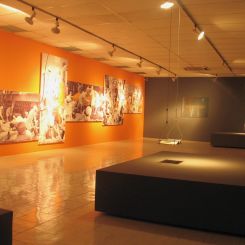 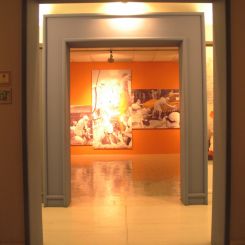 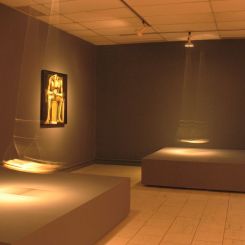 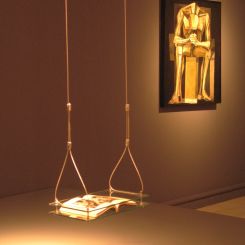