The exhibition included works from the collection and from practicing contemporary artists in Manila. In the forefront were notions of imagination as a tool to focus on the excesses of life and the transgressions of “bodies” in history (e.g. the tortured body of Christ). While the grotesque may carry negative connotations, it nonetheless allows us to visualize otherness with a more accepting view.

Art has always been an agency for the realization of ourselves and the world around us. Grotesque Illustrated relates the story of how we visualize our physical selves and those of others. Using works from the collection and those loaned from practicing contemporary artists, the idea of imagination as a tool to issue the excesses of life and how we have transgressed the body in history comes to the forefront of art. The exhibition challenges our visuality with the medium of the artist’s eye as out guide. While grotesque may have negative connotation, it allow us to visualize otherness towards s a more accepting view of different.

“Stunted children, undersized men and anomalies such as Tom Thumb and his competitors are well known to everyone. The dwarves who served as jesters and fools at the medieval courts are familiar to readers, but tribes of people who by nature are pygmies are among the discoveries of recent times, or at least are the vindication of the truth of what had been regarded as ancient fables.”

The abnormal, the exaggerated, monstrosities, the satiric, the disgusting, the terrifying and shocking, the absurd, the disturbing, the comic are but some aspects of the grotesque. Grotesqueness has always been primarily physical in nature, its materiality, captured in literature if only abstrusely, and hardly ever represented in music, the material being the very corpus of its possibility.

Any amount of disfigurement or excess begot the label grotesque, freak, bizarre, the abject, and were negatively set aside to the periphery of society. These peripheries at the European center were the fairgrounds, the carnival or circus, or the mental home. And when America began its conquests, the frame was similar to the European roots (and/or counterparts). In the texts lifted from Louisiana and the Fair, the tone is that of the search for difference, to place the colonizing power in a position of looking and judging:

“While the Ainu are barbarous, and are said to be unable to entertain more than one idea at a time, like wild animals, they are not repulsive in appearance…

Beginning with the most primitive, the Negritos, some fourteen in number, occupy a small tract of land… here the exhibit their skill with the lance and the bow and arrow for the delectation of the American visitor.”

Local artists embraced the shock value of the grotesque through various trajectories. For many it was not always a matter of the grotesque as abject subject, but rather a reckoning with thoughts, influence, and historical time into images. Juan Arellano painted a naked couple and a baby lying on a hammock with a bonfire which pictorially appears to be devouring the sleeping trio, while a snake looks on. The destruction of the body, transgressed by fire returns to us the picture of the articles provided in carnivals of men lighting themselves up, of lions leaping through burning hoops, of men eating fire. Fire, a cosmic element, is part of grotesque imagery. And while Arellano may be alluding to the loss of Paradise, the very notion of copulation, births, and eventually the story of Cain and Abel all fit within the grotesque for social and historical critique which could fit within postcolonial of the grotesque theory as put forth by Bakhtin. Other artists use the very elements of the grotesque for social and historical critique which could fit within postcolonial parameters.

Manuel Ocampo for example, uses the imagery of defecation, the transgression of the body by the filling in of all bodily orifices with inanimate objects and the open mouth to great effect. His works are critical of the colonizing powers, not only in the Philippines (although this is central in many of his early works), but also of other imperial spaces.

Artist Elmer Borlongan, coming from the line of socio-realist painters, paints the physical marks that are left on people by the harshness of life. His works follow the line of older artists like Danny Dalena and Onib Olmedo. Borlongan’s works also look at historical critique and insert one of the grotesque’s more imporatant images, the open mouth and the hanging tongue in ‘Benedisyon.’ The corpulence of Danny Dalena’s ‘Sukat’ is juxtaposed with an emaciated Christ by Nikki Lopez.

Galo Ocampo’s Christ on the cross is blinded, his vision covered. Transgressions on the physical have also been done on the material work of the art piece itself. Jose Joya’s ‘Quiapo Nazarene’ deoes this on two levels, using subject (the suffering Nazarene) as well as violence indicated by the distortion and exaggeration of his application of paint. The violated body of the Nazarene is erased further by being painted in expressed through the use of line and color.

Jayson Oliveria in his big piece “Pinnochio” reminds one of Lucio Fontana’s pristine canvases penetrated by gashes, but without the latter’s elegance. Oliveria ravages his work by slitting through the canvas, with huge areas of the canvas flopping over towads the viewer; Pinnochio a carved toy (that turns into a real boy) is pushed one more step towards the grotesque by the ruin ade upon the piece as art.

Louie Cordero is one of the youngest artists included in the exhibition and his works appear to follow Ocampo’s general imagery of the grotesque and how laughter is able to immobilize terror. His works draw from a variety of contemporary images involving everything from local icons, comic book heroes, and film references mixed in with television, history and art history. With paintings that contain images of the dwarf actor Weng Weng in a James Bond outfit, a werewolf a number of hybrid creatures that are a combination of inanimate objects, unruly hair, home appliances and human body parts, it is no surprise that his hand-drawn comic book, entitled Nardong Tae, the central figure is a walking piece of shit, literally.

Wild Imaginations: The Grotesque Illustrated is also a story, as all exhibitions are hopefully stories that lend art and re-viewing history that agency with which to pursue change--- to visualize many shades and layers that can be possible in a story; words, translations, absence, the body, drawings, illustrations, paintings, power, curiosities, the human, ourselves, those outside of our own being, and most importantly the imagination. 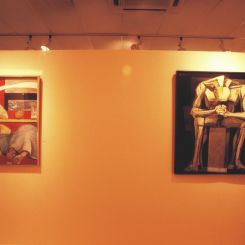 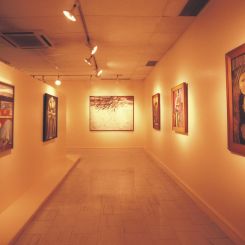 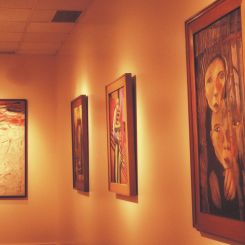 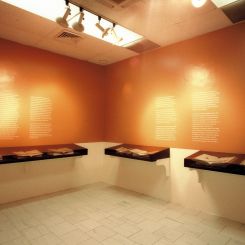