This time around, “grounded” is a nod to the museum’s position as a cultural institution, an examination of its relationship with different localities as it made its way from Pasay to Pasig in the 1980s, and as it prepares to relocate to Makati by the middle of the decade.

Grounded is a literal and metaphorical take on notions of rootedness, engagement, and mobility in scapes and interventions within and without these referenced sites.  This broadly interpreted theme is paralleled in the diversity of practices evinced here alongside pieces from the Lopez Museum and Library collection.  From Alma Quinto’s research-propelled work with Pasig River Warriors to Eric Zamuco’s allusive staging of seeming precariousness, from Goldie Poblador’s touch-baiting hybrid of art and laboratory artifice to Barbara Hlali’s painful depiction of bodily engagement, from Ahmed Al Shaer’s comical take on natural selection to Toym Imao’s cross-referencing folk and diasporic armature, from Khaled  Hafez’s tri-image ode to a stalled revolution to Josephine Turalba’s dis-charged footwear bidding a traipse through a once private memory trove, Grounded is a posed exercise, of looking back and hopefully trudging forward despite the odds.

Taking on proposed questions from an earlier exhibition called Extensions at the Lopez Museum, Grounded  expects to further invoke the museum’s positionality—its physical as well as social locus as a cultural institution making its way from Pasay, Pasig and eventually to Makati, the exhibit asks how LML attempts to negotiate the ebb and flow of its relationships with these various sites and spaces where publics, however emergent are desired and pursued.  In bringing out pieces in the permanent collection evoking waterscapes alongside artists’ projects, Grounded is also an intended parallel to the Goethe Institut’s initiated Riverscapes IN FLUX exhibition at the Metropolitan Museum of Manila. 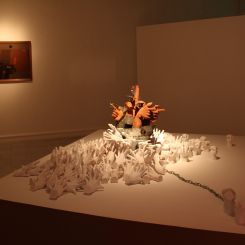 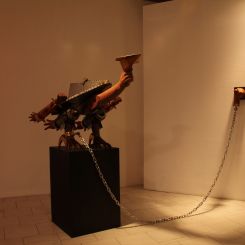 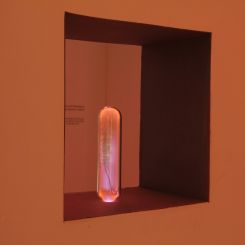 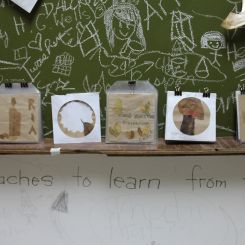 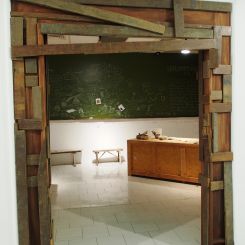 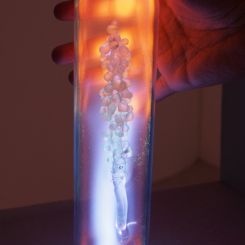 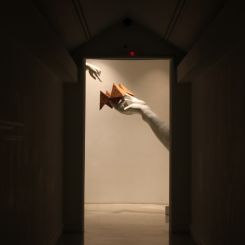