Fixations: Notions of Obsession marks the very first time that certain aspects of the museum collection engage with and function as counterpoint, inspiration and framework for contemporary art practice. The museum’s collection also provides resonance to the collections of Jonathan Best, and Raymond Red, allowing for animated discussions concerning highbrow culture with that of pop, a fusion of the old and new, and the previous few with a mass market commodity. The exhibition also features the work of Swedish artist Annika Eriksson is another hallmark in the museum’s history.

The Lopez Museum and Library is clearly at a transitional point in its development. Without leaving behind, or worse ignoring its present holdings, it also seeks a more dynamic and progressive engagement with contemporary art, and with its audience in general. …

In a sense Fixation ably demonstrates the museum’s evolution, allowing curatorial positions and interpretation of the art collection to be proactive, to spark discussion, perhaps even dissent, as it strives to become an active participant within the country’s artistic and cultural blueprint.

Possession and ownership have become means by which one might accumulate power or formulate an identity. It is at this juncture where the exhibition Fixation: Notions of Obsession comes into play, as it seeks to investigate the liminal site where collecting begins as a means before becoming an end, and the site where obsession takes over a life and ends up defining the individual. The exhibition taps on the desire to possess as the motor for modern consumption.

To fixate is to direct one’s gaze, to hold an object or person, thought or idea within the scope of an individual’s concentration. This ‘dialectics of seeing’ as suggested by intense and focused attention recalls Benjamin’s proposal, that of a materialist phenomenology that moved between historical analysis and an enchanted credulity. Interestingly the collections gathered for this show traverse such territories, settling upon areas of history and scholarship, enchanted attentions, fascinations with urbanity, and an obsession with the very act of collecting.

“Perhaps all that is left of the world is a wasteland covered with rubbish heaps, and the hanging garden of the Great Khan’s palace. It is our eyelids that separate them, but we cannot know which is inside and which outside." – Invisible Cities, Italo Calvino

The Lopez Museum and Library is not a forgiving site, neither is it a space which allows for much (or any) criticality; its collections are predicable if not their acquisitions. Its projection of institutional conservatism continues at its forefront despite efforts to engage with current contemporary art and life. The Lopez Museum and Library, like other museal institutions of its nature, is one founded on a person’s excessive’, sometimes even rapacious need to have, a pursuit productively and generously transformed into rule governed, meaningful desire, and its pruning towards more inventive sites of negotiation will be a process pained. The museum’s site, for this exhibitions (and for many others in its past and its future), becomes the frame for other people’s personal fascinations. Layered upon the museum’s private collection which, up until the exhibition, their personal fixations kept under cover from the public eye. Placed throughout the museum’s rooms, the borrowed collections interrupt expectations and expected representations. Formal vitrines protect action figures from the Hasbro toy company. The map room charts a different kind of urban cartography, through videos and photographic documents. Other placements may be more conventional but will nonetheless give those who have been to the museum in the past a surprise, and for those who will come for the first time, see the exhibition as an invitation to explore the holdings of the museum. That said, the interventions introduced within the museum spaces may come as a shock, perhaps for some certain displeasure at the seeming irreverence with the inclusion of objects, practices and interests not traditionally seen within its hallowed halls. On the other hand such inclusions could be received as an engaging surprise to see things anew, with fresh eyes, an open mind. It will at times seem like society encroaching upon art.

“Objects are proofs: the proof of history and the mark of others, of disparate origin and of manufacture. And a proof in both senses: proof as verification and testimony to material history, and proof as first draft or first impression—simply one narrative, one history among many possibilities.” (Groom)

The work and collections in Fixation traverse ground from the resplendent position of collections to the less-than-admittable personal obsessions. The objects and practices chosen are not representative of collective obsession in the country. Instead, they are subjective choices; it was simply an act of choosing fascinations which I personally found compelling for their resonance in contemporary life and the practice of contemporary art and collecting. The apparent miscellany may resemble that of a collector whose collections are as various as they are riveting, but the coherence of such diversity comes under each collector’s and artist’s incessant pursuit for something or someone.

“… he unlocks the relationship of body and material, unpacks physical metaphors with oblique strategies… lists culled and salvaged and made into other lists, maps and measurements for navigating the topographies of our ground. The ground we inhabit today is that of the urban, but it is composed from the throwaways of the past: we dwell on what archaeologists call made ground. We are all accumulation. (Groom)

Most of the works in the exhibition leaf through the compost of our burgeoning cities. Collections are made from objects which are chosen for a myriad of reasons and motivations. Picking through the rubbish bin of cultural commodities, collectors and collecting proposition that a materialist phenomenology looks at the debris of mass culture as the source of philosophical truth would seem to be our only recourse to reconciling ourselves with society. For what else will remain of us as we sift through rubbish, mounds of collected material left after a life has passed? How can we use our material leavings and possessions to pierce through truths and perhaps, fictions?

Collecting is such an activity that must be recognized as an open-ended avocation, where the collector only sees perhaps, the next object to complete the collection. There is no point of satiation for an avidly passionate collector, there is only anticipation ‘of perpetually increasing collection.’

Obsessions are led people to search the world for a peculiar object or to satisfy a desire. Many collections were begun to satisfy this passion and have continued on without an end. Many obsessions lead to fetish, this 'irrational fascination,' as William Pietz writes, for an object. While collectors have been allowed their own peculiar tastes for particular objects for their subjective desirability, some artists have used collections, or the act of collecting for their own practice. Other have fed on the obsession of others to feed their own. The exhibition presents areas of particular obsessions, how these are carried out and realized, how they are part of contemporary society. Alice & Lucinda, personas taken on by artists Yasmin Sison and Lena Cobangbang, persistently track down a graffiti artist's words through the city's tortuous interior. Jonathan Best, one of the country's better-known collectors, share a magnificent photographic collection of massive collection of action-man toys, as fixation worthy of a film. Artist Alfredo Aquilizan collects and inventories with the belief that each object's history is inherent in the object. Artist Ikoy Ricio brings together his fascination for cultural flotsam: used bus tickets, plumbers' signage, photographs, etc., and installs these are objects plucked from the original context. 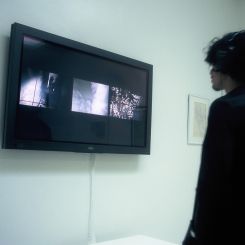 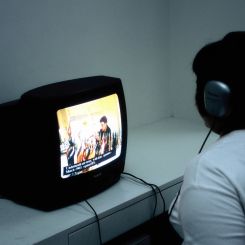 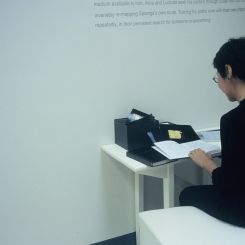 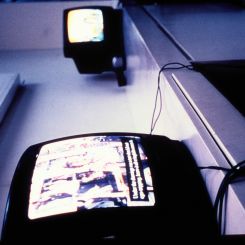 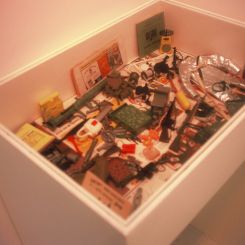 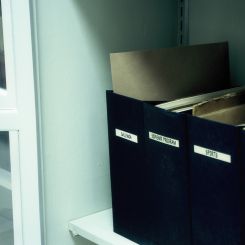 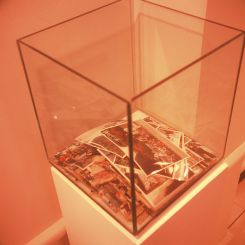 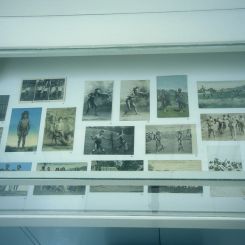 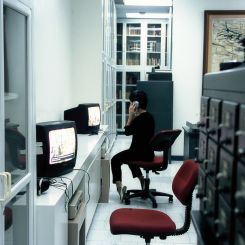 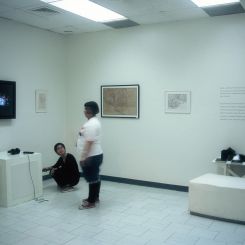 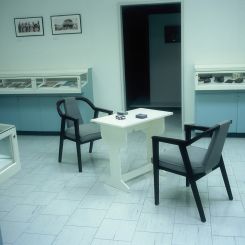